After the chocolate mass has been conched, all the fats, such as the cocoa butter and the milk fat, are fully melted. For the next processing step, however, they also need to be tempered. The aim of tempering is to encourage the cocoa butter to solidify in crystal Form V (out of six possible forms). This guarantees that the chocolate melts quickly, is ideally glossy and has a good snap and long shelf life, as well as stopping fat bloom from forming (white patches on the chocolate) or the chocolate melting at room temperature.

During tempering, the chocolate is gradually cooled in the tempering machine, step by step, from 46°C to about 26°C, along a preset temperature curve and with constant stirring. This produces the desired Form V crystals, but also unwanted Form III and IV crystals. To melt out any Form III and IV crystals, a subsequent warming phase heats the chocolate back up to 29-33°C. The unwanted crystals melt back away, and the chocolate now only contains Form V crystals.
The temperatures vary along with the content of cocoa butter or other fats, such as milk fat or nut oil, and must be adapted to suit the different chocolate masses.

It is only at this point that the chocolate mass is ready to be poured into a mold. 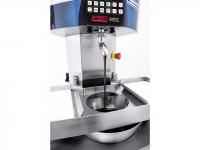 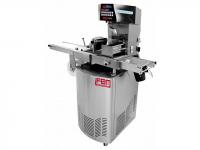 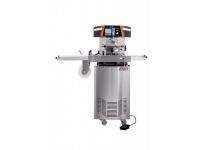 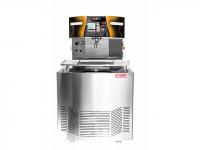 Description The machine is controlled by an electronic board which allows to set the heating and…
€ 20.900,00
More info > 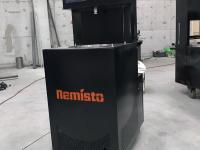